Our Funny Family Christmas Image | How It Was Created | Aurora, CO Family Photographer

Last year I set out to create an amazing Christmas card with a "magical" image of our daughter. I was very pleased with how it turned out... an image of her reading a Christmas book in front of a window while unbeknownst to her, Santa and his sleigh were passing the moon in a starry filled sky behind her. You can view the final image and how I created it here.

Of course, this year I just had to do something equally as creative. Those who know me know I'm a bit competitive... even with myself. That competitiveness helps me grow as a photographer as I figure out new ways to create images, practice Photoshop techniques, and think creatively. This year it prompted me to try to outdo myself on our holiday image! Now being creative doesn't mean I'm above checking out Pinterest for ideas every once in a while and ultimately this is where I came up with the general image idea. But I definitely put my own spin on it! 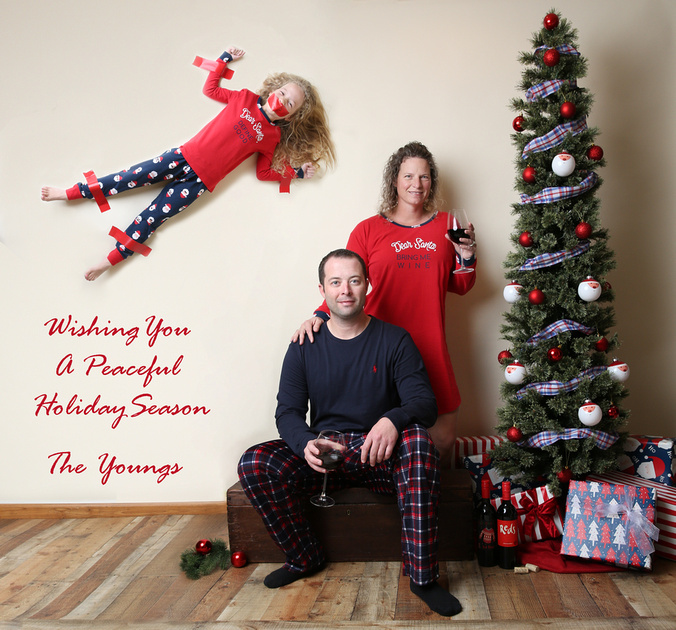 After deciding on the concept, I set out to gather everything I needed for the image. Originally I purchased some buffalo plaid print PJs on Amazon. It was easy to find something for everyone to wear since this print is very popular this year. But a few hours later I walked into TJ Maxx and saw some kids PJs that said "Dear Santa, Define Good" and PJs for me that said, "Dear Santa, Bring Me WINE" and I knew these would be perfect! So I quickly cancelled my Amazon order and bought these as well as some coordinating PJs for my husband. I returned to Amazon to find coordinating wrapping paper, ribbon, and Santa ornaments for the tree that matched my daughter's PJs. On to the liquor store to pick up some wine, which of course also needed to coordinate. Ugly Sweater Red? Perfect!!! I grabbed the Christmas tree we put in our daughter's room and an antique workbox I bought ages ago. Finally, I pulled down the seamless paper I have in the studio to use as the background and grabbed a panel I use for flooring.

With everything set-up, we donned our PJs and I set up my camera on a tripod. I focused on my husband, jumped into the picture and had our daughter press the shutter button... several times. As expected, giving up the element of control when I'm on the other side of the camera is a bit difficult for me as I can't see how everything looks. Ultimately this is why we ended up doing this twice (wine was a good bribe for my husband) and I Photoshopped the left two images you see below together to achieve the look I wanted... including the angle of my face. Let's admit it... some angles are just not flattering! 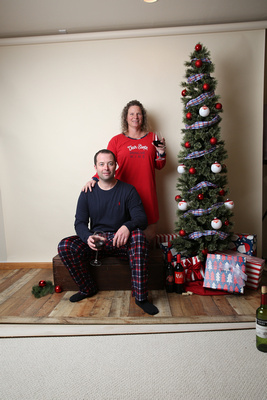 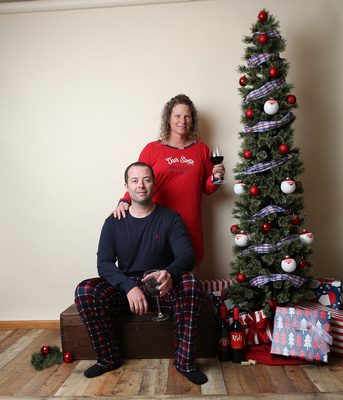 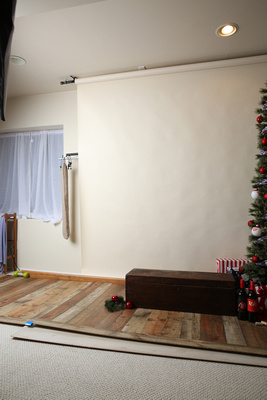 After these two images were merged, and I did a wee bit of Photoshopping to my waist (it was just after Thanksgiving... who wouldn't?), I realized I needed to capture another image. While my studio is great for capturing a closeup of an entire family, it's not quite large enough for full length family images, especially when one family member is not grouped closely to the others. With more space needed on the left side to place our daughter "on the wall" I pulled out another floor panel and took a photo of the "extended" set-up (above right). As you may notice, this image was taken at a different angle. This is because the family photo was taken from the stairway to the studio in order to get further back and ultimately I couldn't move to the left for the additional shot. Again, with a little Photoshop magic I was able to modify how the angle looked as well as extend the tan background. 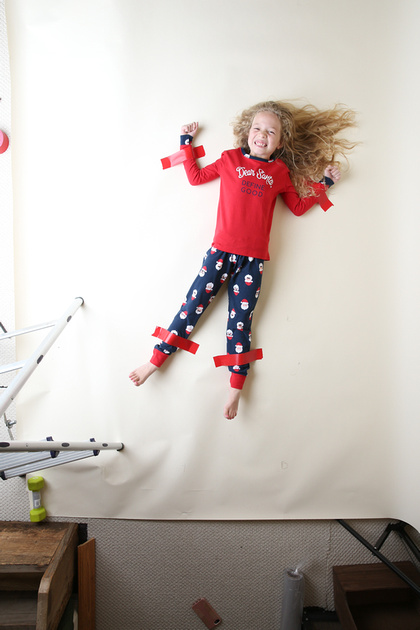 Finally it was time for the most important family member's close-up! I got our daughter dressed and ready to go. Then I told her I was going to tape her to the floor. Her response? "Ummm... I am NOT doing that!" LOL. Of course she then happily complied and told me she deserved ice cream.

I rolled the paper used for our background down so it would cover the floor and then positioned her on the paper. I took some test shots and re-positioned her several times because I knew the angle of the lighting needed to be consistent for everyone in the image to make it look realistic. Once I settled on her position I taped her arms and legs. I also tried to position her hair so it looked like it was hanging and pulled her PJs to the side for the same reason. Of course with a squirming 8 year old this was not the easiest thing to do. Ultimately I did a bit more Photoshop work on her hair for the final image.

Capturing the image was a bit awkward and I'm pretty sure I pulled a muscle in my lower back. LOL. If you take a look at the photo on the left you will see a ladder. I was standing on that ladder to take that picture. Standing, leaning significantly, bracing myself against the ceiling and holding my camera out while I shot on live mode. This setting on my Canon 5d Mark iii's allowed me to see the image on my camera's LCD screen and focus while my camera was at arms length... and while I rarely use this feature, it was great to have for this capture.

After the image was taken it was back to Photoshop to 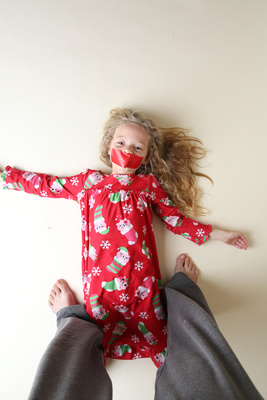 add our daughter into our image. Because the lighting wasn't exactly the same, this took a bit of work to make the image look seamless. After that was done I realized something was missing. She just looked a bit too happy to be "tapped to a wall" so I decided she needed a bit of tape on her mouth. Back down to the studio we went and I took another picture of her with the tape. I then took just the tape portion of her faced and over-layed it on the image and carefully blended it together. Finally I added text about having a peaceful holiday to pull it all together and the image was complete! I had it made into an ornament for our tree and because my husband laughs every time he sees it I'm planning on putting it on canvas so I can hang it up every Christmas.

What will I do next year to top this? I've already got some ideas! SUBSCRIBE to my RSS feed below to ensure you don't miss it.

Let me know what you think of this image (and the process) by leaving a comment!

Interested in capturing some unique images of your family? Contact me today to discuss your own personalized photo session!

PS - No wine or children were harmed during the creation of this images... well, maybe some wine ;)